Home Europe Manchester United up for ‘2 or 3 renowned signings’ – One player...
SHARE

James Rodriguez is ‘very close’ to leaving Real Madrid for a second time this summer, it’s just a matter of where he’ll end up.

Tuesday’s edition of AS presents what they believe is the situation, and they state Manchester United, Everton, Juventus and Napoli all loosely want the player.

When it comes to the Red Devils, it’s claimed Manchester United have ‘already taken an interest’ in the Colombian’s situation at Madrid.

The Premier League club can’t continue with their current record of failure and therefore are up for ‘two or three renowned signings’. It’s of course questionable whether James still fits into that bracket, and Real Madrid are going to need to be flexible this summer when they try and see the back of the 28 year old.

That will either mean a vastly reduced price or a loan move with a buying option for interested clubs, the second option could be dangerous for Madrid given the player’s contract expires in June 2021.

Manchester United are thought to be targeting Jadon Sancho for their right wing, and it may be conceivable that Jorge Mendes could present his client James as a cheaper alternative. 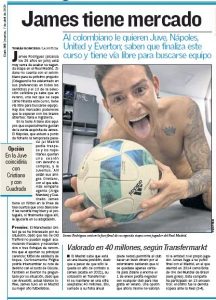 Yet, whilst the footballer can operate on the right, he’s more of a down the middle player, and that would see him potentially cross positions with Bruno Fernandes.

Unless there are exits from Old Trafford, it’s difficult to see how this one would work, but for a relatively low cost loan, it may be worth a gamble if other targets end up out of reach.