Nottingham Forest are close to agreeing the signing of Filip Krovinovic on a loan deal, according to reports from Portugal today.

Newspaper Record reports there are advanced negotiations between the Reds and Benfica, and only a personal agreement with the player is needed now.

Krovinovic is currently having a spell at West Brom, but Record claims that his deal with the Baggies will soon be rescinded so he can join a new club.

The outlet adds that the likes of PAOK, Hajduk Split and Dinamo Zagreb are all interested in the signing, but it’s really Nottingham Forest who are ‘preparing’ themselves to receive him. 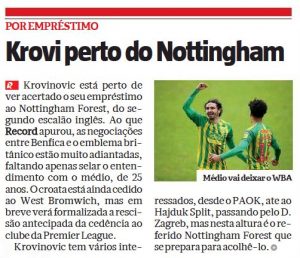 Earlier today, we’ve covered an interview that Krovinovic’s agent gave to the Croatian media, admitting that there were several offers for the midfielder.

The player only has 542 minutes in the Premier League this season for West Brom, and that’s the main reason why he’s looking for a new club in this transfer window.

The links with Nottingham Forest aren’t new, and things seem to be really moving forward now.