As long as Kalidou Koulibaly remains a Napoli player, there appears to be little chance of Sokratis Papastathopoulos getting his move to the south of Italy.

The Serie A club’s interest in the Arsenal player is well known, and there have been multiple reports of a potential transfer, which should be fairly straightforward if all the planets align for it to happen.

This is corroborated by Gazzetta dello Sport on Wednesday, who explain the ‘pact’ between Napoli and Sokratis is ‘solid’ but it has a ‘deadline’.

The reason for that is the Greek defender has ‘rich offers’ from Saudi Arabia and Qatar, as well as some from the Premier League itself, and ‘doesn’t wait to wait for the last keystrokes’ of the transfer window. 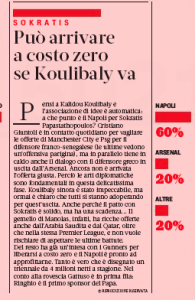 He ‘already has an agreement with the Gunners to be freed at zero cost’, which Napoli are ‘ready to profit from’, having already agreed a ‘three year deal of €4m post tax’.

However, they need to get rid of Koulibaly first, and that’s the biggest problem on their hands right now.