Fernando Llorente left Sevilla and made a switch to Swansea City in the summer of 2016.

The 34-year-old was the standout player for the Welsh club during the 2016/17 campaign, scoring 15 goals and registering one assist in 33 league appearances.

He was directly involved in over 35 percent of the goals scored by Swansea and was crucial in helping them avoid relegation that season.

After spending one season at the Liberty Stadium, the Spaniard left and made a switch to Tottenham Hotspur. He signed a two-year deal with the north London club and his current contract will expire in the summer.

Llorente’s former Swansea teammate Jordi Amat sat down for an interview with Catalan newspaper Mundo Deportivo and during the course of the interview, he was asked about the striker.

“He [Llorente] is a phenomenon. The year he was there, he saved us. He scored, I do not know if it was 15 goals. Outrageous,” Amat, who now plays for Rayo Vallecano, said.

“And above all, his personality stands out, he is such a good person, humble … He has won important things and is an excellent person. The relationship is very good, we talked recently.”

Amat came up through the ranks of Espanyol’s academy and current Tottenham Hotspur manager Mauricio Pochettino handed him the first team debut at the Spanish club. 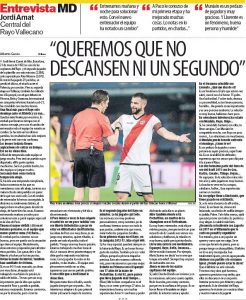 Asked about the former Southampton manager, he said: “He [Pochettino] is a very good coach, he is there on his own merits, I will always have a great memory of him.”

“When we see each other, we greet each other and talk, the relationship is very good, hopefully he will continue to triumph.”