Takvim claim Fenerbahce have identified three options to replace Martin Skrtel this summer, with one those central defenders being Manchester United’s Marcos Rojo.

Skrtel’s contract expires the end of the season and it’s thought he could join Serie A side Parma on a free transfer.

According to the Turkish newspaper, Fenerbahce sporting director Damien Comolli now wants to sign either Christian Zapata, Neven Subotic or Rojo during the next transfer window.

It’s claimed Comolli has already held talks with Rojo’s agent and the Turkish club will decide what to do at the end of the season.

Earlier this month we covered reports from Turkey that the Manchester United defender is a target for Fenerbahce and that the Turkish side are waiting for manager Ersun Yanal to give the green light to pursue the Argentina international.

Rojo is expected to leave the Premier League club due to a lack of game time and with Manchester United likely to make a move for another central defender in the summer his chances would be further limited. 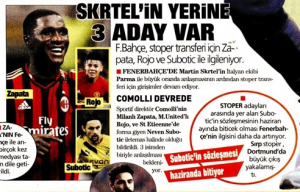 The 29 year old has only made 4 first team appearances in all competitions this season and he is under contract at Old Trafford until June 2021.