Monday’s edition of another Belgian newspaper Het Belang van Limburg brings a positive update about the Seagulls’ efforts to land the 24-year-old.

Graham Potter’s side have been in talks with Genk ‘for some time’ and the negotiations were stepped on Friday evening and over the weekend.

The two clubs have reached an agreement for the transfer of the Jupiler Pro League star for €20m.

“Everything went in a correct and constructive atmosphere. With a lot of mutual respect. In fact, discussions about a transfer should always be this way. But now Leandro has to decide for himself,” Genk CEO Erik Gerits stressed.

Gertis’ comments make it clear the English side need to agree personal terms with the player for the deal to take shape.

HBVL claims Trossard’s agent Josy Comhair held talks with Brighton on Sunday, but he returned to Belgium without finding an agreement. The wideman was not present during the talks. 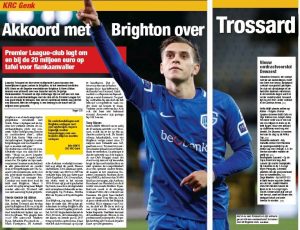 With Brighton and Genk already agreeing the fee for the sale, it is now down to the former to agree personal terms with Trossard to conclude the transfer.