Despite being touted to be one of the big stories of the summer, Nicolas Pépé’s future has been one of the quieter sagas so far.

Working quietly behind the scenes, the Lille player’s representatives seem to be trying to figure out which route is best to take for the Ivory Coast international, and we’re down to just a few options.

Despite L’Equipe’s claims that Inter (who reportedly made a €90m bid) and Atlético Madrid were on the scene, La Voix du Nord feel it’s far from over, as Liverpool and ‘especially’ Manchester United still have a few tricks left up their sleeve.

The local newspaper explain the forward has ‘never hidden his deep desire’ to quickly play in the Premier League, and, according to their information, both the Reds and the Red Devils ‘haven’t said their last word’. 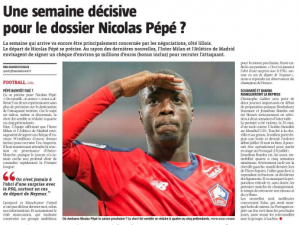 La Voix du Nord state Manchester United want to build ‘an ambitious group’ for next season, and it appears that Nicolas Pépé could be a part of those plans.

However, the outlet do warn that a Neymar departure from Paris Saint-Germain could lead to the Ligue 1 champions turning their attention more concretely on the Lille star.

There’s no fee mentioned, and it seems La Voix du Nord simply rely on L’Equipe’s estimates from the Inter and Atlético interest for this story.

€90m does seem like a lot, especially for Inter, who can barely put together money for Romelu Lukaku, Antonio Conte’s number one request (according to the Italian media).

As for Manchester United and Liverpool, well, if they want to spend that much, they will. That’s no secret.