Demiral has been linked with a move away from the Italian champions in recent weeks with the likes of Manchester United, Leicester City and Arsenal said to be interested in him.

Sabah now report Manchester City are very eager to sign the Turkish defender and are ready to offer €45m to Juventus to complete the deal.

The Turkish newspaper states Juve are keen to keep Demiral as they see him as an important asset for the future. Demiral has kept Matthijs De Ligt out of the team for the past few games, forming a good partnership with Leonardo Bonucci.

Previous reports said Leicester City had a bid rejected for the former Fenerbahce defender, who’s under contract with Juventus until 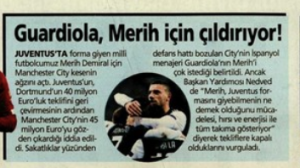 Given Aymeric Laporte has returned to training, this doesn’t seem an urgent issue for City.