Mark van Bommel doesn’t want to use the Wembley pitch as an excuse for his PSV side against Tottenham, and he’s made that point repeatedly whether speaking in his press conference, to the Dutch media, or to PSV’s official channels.

Despite that, he can’t hide how irritated he is that top level football has been played on the pitch so soon after an NFL match, with all the issues that brings.

The state of pitches has been a big story in the Netherlands over recent years, with some clubs going for synthetic surfaces and that causing worry.

For a long time, Wembley was seen as the example of a good pitch, even if it wasn’t always true, and the current difference is part of a major article for De Telegraaf on Tuesday.

The Dutch newspaper explains the pitch ‘suffered a lot’ during the NFL match, and adds: ‘Football romantics cannot get lucky with the meeting between Tottenham Hotspur and PSV, tonight at Wembley. Little is left of the well-known sacred grass. For a billiard table, the Londoners and thousands of Eindhoven fans really need to find refuge in a local pub.’

Van Bommel is said to have been left ‘shocked’ by the pitch when watching Tottenham against Manchester City, and the PSV boss has made his point: “In principle, this is not possible. It’s outright disturbing. Every time I had to check whether the ball was in the sidelines. 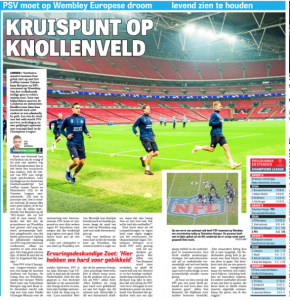 “But we should not complain about it. It cannot be an excuse. Although I do not think they are happy about this in England.”

Tottenham continue to face delays in moving to their impressive new stadium and there’s still no certainty over when the ground will be fully useable.