‘For Nabil Fekir, summer 2019 is already tomorrow’ – L’Equipe kick off a Tuesday article on the Lyon player by making it very clear a transfer is on his mind.

Whilst the World Cup winner, who came very close to signing for Liverpool in the last summer window, is said to be committed to playing for Lyon right now, L’Equipe say ‘sometimes his head turns’ towards a potential move.

It’s no secret that Fekir’s ideal career plan means leaving his current club and testing himself elsewhere, but the right balance has to be found between not giving up on a big move and not letting the idea of it get in the way.

There’s only two interested clubs named this time by the French newspaper, and those are Chelsea and Bayern Muncih. With a ‘possible new chapter’ ahead in Fekir’s career, it’s claimed the two clubs have been watching him.

And that must be another encouragement for Fekir to perform, because Chelsea and Bayern are hardly going to be encouraged to move for the player if his form drops away. 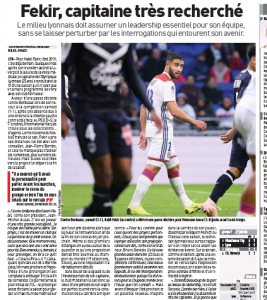 Manager Bruno Genesio has explained he’s expecting a lot of leadership from Fekir over the next period of the season, and that begins with Wednesday’s Champions League match against Hoffenheim.

L’Equipe say the player has ‘everything to gain’ from a good performance.