Nottingham Forest and Swansea City are reportedly among the list of pretenders to sign Gonçalo Paciência from Porto in the summer.

It’s Portuguese newspaper O Jogo who reports it today, claiming the 23-year-old could be on his way out after spending over ten years at the club.

Paciência is expected to be given a chance to prove himself in pre-season, but his stay at the club is unlikely due to the heavy competition for his position.

That’s why the Dragons have already set a price for his sale, and will be demanding €7m for the clubs who want to go and get him in this transfer window. 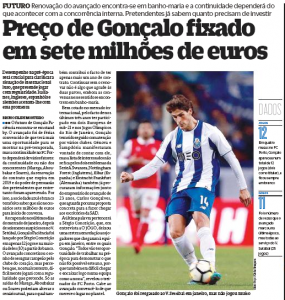 Genoa, Sampdoria, Nottingham Forest, Swansea City, Eibar and Eintracht Frankfurt have all shown interest in signing the player, whose contract expires next year.

Paciência had a pretty good loan spell at Vitória de Setúbal in the first half of the season, with 10 goals and six assists in 24 appearances. He was called back to Porto in January, but couldn’t find the same success at the club.