Of all the ups and downs a player can have during transfer season, Mario Mandzukic can say he’s gone through it all this summer.

The Juventus attacker was heavily linked to a departure when the window was open, with the likes of Manchester United, Paris Saint Germain and Bayern Munich all said to be wishing to sign him.

Mandzukic fought hard to stay at the Old Lady, and this is the story that Tuttosport tells this week. They say the player was waiting until the end to see if manager Maurizio Sarri would finally give him a chance and include him in the Champions League squad.

That’s when, according to Tuttosport, Mandzukic couldn’t even be convinced by a call from Manchester United manager Ole Gunnar Solskjaer. 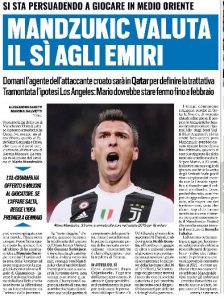 The Croatian international is the only player in Juve’s squad who’s scored a goal in a Champions League final, and that’s what his confidence was all about. But that wasn’t enough for the manager to put his name on the list.

Now Mandzukic has even been linked to a move to Los Angeles, but should actually be moving to Qatar, where the Turin media believe he could sign for Al-Gharafa.

Perhaps he now thinks he should’ve given the European sides a bigger chance.

What even is a Director of Football, and what options do Manchester United have should they want one?

A look at what works around Europe, the background of appointments, and why #MUFC may be best going for a route some fans won't like. https://t.co/CAxkFnpTY8 pic.twitter.com/gilagjWOzr