“Competition? There isn’t any.”

Those were the words of Serge Aurier a few days before Tottenham faced Crystal Palace, making it clear he didn’t think the likes of Kyle Walker-Peters and Juan Foyth should be being picked ahead of him.

An injury to the 22-year-old Englishman forced Pochettino to play Davinson Sánchez in the role against Arsenal, and despite murmurs the young defender could be back against Roy Hodgson’s side, he decided to give Serge Aurier a chance by starting the Ivorian.

Coming off the back of two 90 minute games during the international break, the former Paris Saint-Germain man grasped the opportunity with both hands by forcing an own goal with a low cross for the second in the 4-0 win before serving a gem of a ball for Son Heung-min to make it 3-0. 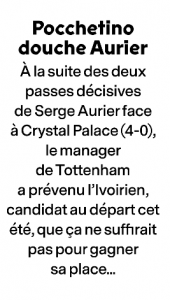 However, according to France Football, that didn’t get the player back in Pochettino’s good books, as the magazine state Aurier was ‘warned’ the performance ‘wouldn’t be enough’ for him to win a starting spot.

Whether that’s for now or for the rest of the season remains to be seen, but if this is true, then you can expect Kyle Walker-Peters (if fit) to start against Olympiakos midweek in the Champions League.