After a catastrophic week at Valencia that saw them bring in managerial changes, the Spanish side will travel to London to face Chelsea in the Champions League.

Los Ches sacked Marcelino and replaced him with Albert Celades and in the latter’s first match in charge, he suffered defeat at the hands of Barcelona.

Though Celades has not completed a week at Mestalla, he will have to assemble a team to face the Europa League winners.

Marcelino preferred a 4-4-2 formation, while Celades likes a 4-3-3 formation, according to AS. However, the new manager is likely to take advantage of his predecessor’s system for the midweek European clash.

The newspaper has come up with a predicted lineup to face the Blues and they expect Valencia’s summer signing Jasper Cillessen to start in goal.

Gabriel Paulista is expected to partner Mouctar Diakhaby in the heart of the defence with José Luis Gayà featuring as a left-back and midfielder Daniel Wass being used as a right-back.

Geoffrey Kondogbia and Dani Parejo are predicted to start in the centre of the pitch with Denis Cheryshev (or Francis Coquelin) and Gonçalo Guedes being deployed in the wide positions. Rodrigo Moreno and Kevin Gameiro will lead the attack against the Blues.

AS warns Valencia the Champions League is ‘no place for mourning’. 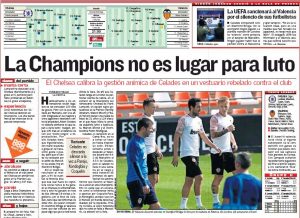 Therefore, the La Liga club’s manager has to devise a plan for Valencia so that their period of feeling sorry for themselves ends at Chelsea.