Thursday and Friday saw claims come from the Mexican media stating Newcastle United are on the verge of signing Santiago Munoz from Santos Laguna.

The 19-year-old’s contract expires in 2022, and given he’s decided to not renew there’s the possibility of a sale this summer.

Record Mexico report that claims a deal has already been agreed are wide of the mark, although they believe that could happen soon.

Newcastle United are said to be ‘very interested’ but it would appear their initial proposal wasn’t high enough for Santos to accept it.

Negotiations are continuing and it’s thought the two clubs could come to an agreement ‘in the next few hours’. 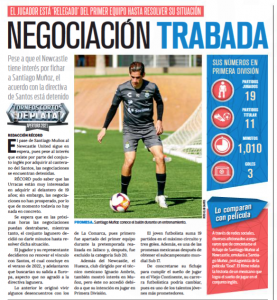 Munoz will not be used by Santos whilst the situation progresses, and according to the report there’s been some annoyance with the younger over his reluctance to sign a renewal with the Mexican club.

That annoyance saw him pushed out of the first team picture and unless there’s a big turnaround it would appear an exit is on the way.

Despite the claims, there’s no explanation on what Munoz’s work permit chances would be with Newcastle United.