Turkish newspaper Aksam report Galatasaray defender Marcao is close to signing for Newcastle United as the Premier League club head into the final stages of negotiations.

At the weekend Marcao was linked with a move to St James’ Park, and today Aksam say an agreement for the player looks close.

It’s claimed the Magpies made an initial offer of €22m, but Galatasaray insisted they wanted a percentage from his next transfer. Subsequently Newcastle United have revised their offer to €19m plus 10 percent of any future sale. 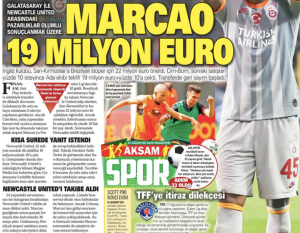 The proposal has been forwarded to Galatasaray manager Fatih Terim, and Aksam claim the Super Lig club are likely to accept the latest offer because they need to bolster their squad before the window closes.

Serie A side Atalanta have also been linked with Marcao in recent weeks, but seem to have dropped out of the running.

He made 39 appearances in all competitions for Gala last season, and his contract at the Turk Telekom Stadium will expire at the end of June 2022.