The Italian newspaper speaks of a ‘first shot’ from Leeds, but makes clear the claims of Whites interest originated in England, and they don’t pretend to have anything extra on that.

What they do say is Leeds need to ‘watch out’ because interest in the Udinese player is widespread. Multiple clubs in the Premier League are thought to be keen, and there’s interest from some giants in Italy too.

Juventus, Napoli and Lazio are all interested, and just like Leeds they’d need to please the Pozzo family who own Udinese.

Gino Pozzo is insisting on receiving a minimum of €40m for his player, and isn’t in the mood to give any discounts out. He believes De Paul has been one of the best players in 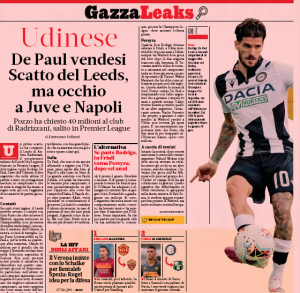 Serie A in recent years and doesn’t see the need to drop the asking price.

Gazzetta believe the Pozzo stance is genuine, and say any club wanting to sign De Paul will need to pay €40m, ‘take it or leave it’.