A rumour in July, Newcastle’s apparent interest in Paris Saint-Germain’s Alphone Aréola refuses to go away, probably because there’s something in it.

After all, few thought Rafa Benitez would enter the new Premier League season with Rob Elliott between the sticks, with the club linked with more than one goalkeeper over the summer, yet that’s exactly what happened.

Things haven’t gone all that badly, but there’s always room for improvement in England’s top tier, and that position seems one of the weakest in the squad.

According to France Football, both Newcastle and Juventus are keeping tabs on the France international as contract talks with Paris Saint-Germain have stalled. 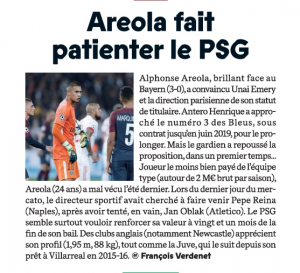 Currently on the lowest salary of the starting eleven, the 24-year-old isn’t best pleased about all the approaches his club made to goalkeepers over the summer, including Atlético Madrid’s Jan Oblak and Napoli’s Pepe Reina, and wants to see what happens this year before committing to the Ligue 1 runners-up.

With 21 months left on his current deal, there’s no rush for him to put pen to paper, nor is there one for Paris Saint-Germain to tie him down just yet.

For Newcastle, an approach next summer certainly sounds like a decent idea, especially if they maintain their Premier League status.