Home Europe Newcastle said to have been ready to offer €20m+ in January, chase...
SHARE

When Newcastle United were linked to the Sassuolo left-back Rogério in January, it seemed like just another move that could happen in the winter market.

The Juventus loanee has been doing pretty well in Serie A this season, and the Old Lady are likely to make some profit with him soon.

But now it turns out that the Brazilian could be involved in one of the biggest deals of the summer window, according to Italian newspaper Tuttosport.

The outlet writes that Juventus, like many other European giants, are interested in Matthijs de Ligt from Ajax. And when making a bid for the Dutch player, the Old Lady could offer an amount of €50m plus Rogério. 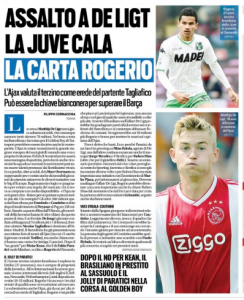 Tuttosport recalls that the likes of Newcastle United were ready to offer €20-25m for Rogério, but now Juve would find a better use for the player.

Meanwhile, Ajax, who like young stars and building value in them, would see Rogério as a good signing, especially for the chance of selling him for more money later.

Newcastle may not be able to compete with that.