Home Europe Newcastle in the picture as agents seek ‘substantial offer’ for player before...
SHARE

On Tuesday we covered claims from France that Morgan Sanson could be moving to West Ham on an ‘imminent’ transfer for around €35-40m.

The claims didn’t feel right, partly because the price was more than Marseille can realistically hope to get. In April it was claimed Wolves had offered €42m for the midfielder, but this was dismissed by people close to the player.

Even Marseille’s local media reported the fee seemed way too high, given Sanson hasn’t had his best season.

It’s clear the Ligue 1 club are looking to sell the player. They need to raise funds, ideally before the end of this month, and with nobody coming in for Florian Thauvin, selling Sanson is the plan… and Newcastle United have been pulled back in.

The club have been mentioned before, and Wednesday’s edition of L’Equipe reports Newcastle are in the picture, along with West Ham, as agents seek a ‘substantial offer’ for the player. 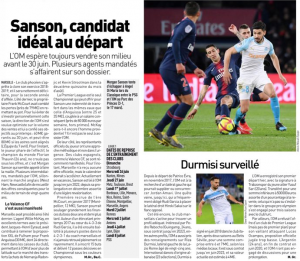 ‘Several mandated agents’ are trying to find a club to pay up for Sanson, and it sounds a little haphazard and desperate.

It’s unlikely they’ll be getting €30m+ from Newcastle.