We can already envisage the Twitter replies of ‘Preparing an offer FC’ from Manchester United fans frustrated with their club’s business so far this summer, but that’s what Wednesday’s edition of Record says is happening for Bruno Fernandes.

The Premier League club have, at least reportedly, been writing their offer for so long that perhaps it’s written in unicorn blood, and being delayed by the lack of available ink.

Record say the player’s agent has this week met Sporting and pushed a move to Manchester United.

There are several clubs thought to be keen, and Miguel Pinho has told the Lisbon club it’s the side from Old Trafford with the best arguments to win the race.

That’s all Record really have on it, with the rest of their article pointing out the English press are also pushing the possible transfer. 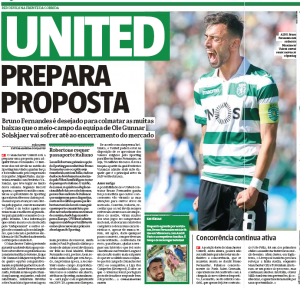 Bruno himself is currently on holiday in Vilamoura, not going too far away from his home, perhaps in case he needs to get things done quickly. Or he may just really like the Algarve.

Record point out there’s still other clubs interested, so Manchester United may not have it all their own way.