For the last month or so, Chelsea have firmly been thrown into the mix for Aurélien Tchouaméni, currently enjoying the time of his life at AS Monaco and with the France national team.

Excelling in the 2-1 win over Spain in the UEFA Nations League final, the midfielder showcased exactly why the Blues, alongside many other European sides, are interested in his services either in January or next summer.

Juventus are the ones seemingly pushing for a deal sooner rather than later, with Tuttosport constantly reminding their readers of the competition and how the Serie A side are trying to get ahead of it.

They mention Chelsea once again in their article on Wednesday, explaining that after the Blues and Liverpool, it’s Real Madrid’s turn to join the fray, wanting to create a midfield pairing of Eduardo Camavinga and Tchouaméni in the long run.

They aren’t the only ones claiming Thomas Tuchel’s side want the AS Monaco starlet either, as Le Parisien state the London side are ‘attentive’ to the player, who many see as mature beyond his years. 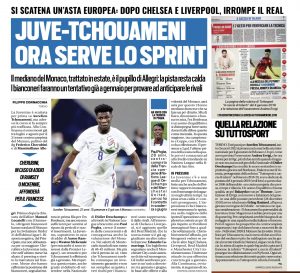 The French newspaper interview a few people about him, including Jean-Luc Dogon, who trained him with the U17s and U19s at Bordeaux.

He said: “He prepares, analyses and anticipates everything. As a teenager, he was already looking to understand everything at training. He plans things and never leaves anything to chance. He’s a hard worker. He never panics and manages his emotions”.

All that has allowed him to be where he is today, which isn’t quite on top of the world, but he’s getting awfully close to reaching a level where few will be able to ignore him.