The Mirror’s ‘Real Madrid to swoop for Tottenham goalkeeper Hugo Lloris if Spurs fail to win silverware this season’ weekend claim was surprising on at least a few fronts, as seems to increasingly be the case with weekend transfer scoops from the English newspaper.

Firstly, Real Madrid have a very close connection with their local media, and Lloris certainly hasn’t been pushed forward as a frontrunner for the Spanish club recently.

Secondly, ‘the Frenchman would cost around £25m’ is perhaps optimistic. This is Tottenham, and Lloris has a contract until 2022. And again, this is Tottenham.

Thirdly, Kepa wasn’t mentioned. Not one measly naming of the Athletic Club Bilbao goalkeeper who, according to Madrid’s closest media, the club are very seriously considering signing.

Kepa is 23 years of age, and Spanish. That’s a big plus for a club who so wanted Iker Casillas’ long term replacement to be David De Gea. Whilst the Manchester United goalkeeper is right now better, there’s a Madrid hope Kepa can grow into an excellent Spanish number one.

Real Madrid and the Spanish media, rightly or wrongly, probably the latter, wouldn’t see Lloris as an improvement on Keylor Navas and so the inevitable battle with Tottenham wouldn’t be worth it.

Kepa’s contract ends in the summer and right now he has a €20m buyout clause anyway. On Monday, Marca explain that in order to make things as easy as possible, Madrid will pay €25m.

Athletic are notoriously awkward with sales, given their tough recruitment policy, and will try every trick in the book (a book they wrote) to hinder a transfer. Therefore, an extra €5m, even though a few months before Kepa would be free anyway, makes sense to Madrid. 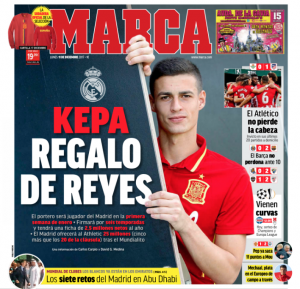 Marca state the goalkeeper will sign in the first week of January, with Madrid not wanting him to run out his contract and be put under huge pressure to renew or face sitting in the stands. Kepa is in the Spain squad and wants to stay there for the World Cup, so being ostracised, Fernando Llorente style, wouldn’t suit.

And mentions of Hugo Lloris in Marca’s article about Real Madrid recruiting a new goalkeeper? Zero.

Mauricio Pochettino and Daniel Levy probably don’t really ‘face a battle to keep Hugo Lloris out of the clutches of Real Madrid’.