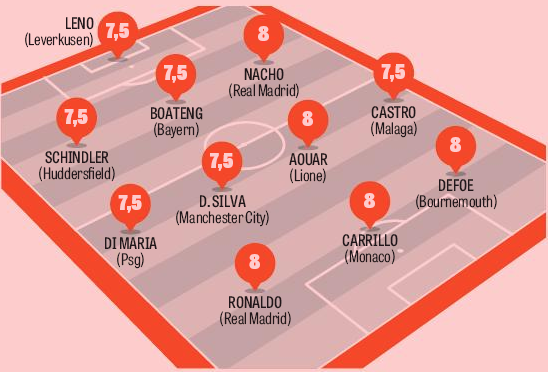 Each week grand old Italian newspaper Gazzetta dello Sport pick a selection of the best performances from around Europe.

Ignoring their own Serie A, Gazzetta choose a European Team of the Week, and each Monday there’s usually a few inclusions from the Premier League.

This week is no different and three players from England’s top division get the nod. Manchester City’s David Silva, Bournemouth’s Jermain Defoe, and Huddersfield Town’s Christopher Schindler are all in there.

Silva shone in the biggest match of the weekend, as the Manchester City player helped Pep Guardiola secure a win at Old Trafford.

Scoring the first goal of the game, Silva was one of the best players on the pitch, but not all Manchester City fans would insist he was Man of the Match, in a game which saw several key performers but nobody head and shoulders above the rest.

Defoe was probably more standout in comparison to his teammates as Bournemouth were perhaps fortunate to draw 2-2 with Crystal Palace. Without Defoe and his two goals it would have been hard for Eddie Howe’s men to get their point, but even then Bournemouth had to rely on an awful Christian Benteke penalty.

Christopher Schindler was good at the back for Huddersfield Town as they beat Brighton, and also managed to assist one of Steve Mounie’s two goals.