Amadou Haidara was one of the first few names linked to Manchester United after the Red Devils confirmed the appointment of Ralf Rangnick as their interim manager until the end of this season.

The midfielder had repeatedly made his desire to play for the Premier League side public, after signing RB Leipzig in January 2019.

Rangnick was in charge of the German club when the 23-year-old joined them from Red Bull Salzburg, but the Mali international suffered a cruciate ligament injury a month before completing a switch to the Bundesliga.

This week’s edition of SportBild have published an interview with Haidara, where he explained why he is greatful to the current United manager.

“Yes, Ralf plays a very big role in my career. Don’t forget: when Leipzig wanted to get me, I tore my cruciate ligament. But Ralf said that I should come anyway. I wouldn’t have expected that back then,” he said.

“I’m very grateful to him because he really wanted me and gave me great confidence as a coach in Leipzig. He later told me to stay with RB and trust that Julian Nagelsmann would make me better.” 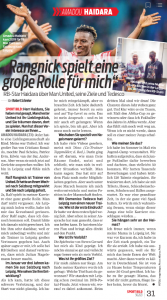 Earlier this month, reports coming out of Germany stated the Malian is ‘one of the top candidates’ for the Old Trafford club in January. Leipzig chief Oliver Mintzlaff even revealed “Rangnick loves” the player, when addressing the United rumours.

SportBild quizzed Haidara about his admiration towards the Premier League side and also the reports linking him to United.

Responding to that, he said: “Everyone had a favorite team as a kid. Mine was Manchester United. I was a big fan of Cristiano Ronaldo, I liked Paul Scholes, Patrice Evra, Edwin van der Sar, Anderson. But if you want to talk to me about rumors: I’m at Leipzig and I feel good.”