Ole Gunnar Solskjaer has a big task ahead of him this summer, and for the summers to come if he stays in the Manchester United job long enough.

The squad needs restructuring and the manager needs to take even further notice of his former boss Sir Alex Ferguson. On more than one occasion, Ferguson made it clear he bought the person before the player and signed those who he thought had the right attitude and mental capability to perform for United.

That seemingly went out of the window in recent years.

Solskjaer automatically believes players want to represent his club and has had something of a shock since finding out that full effort isn’t necessarily something which can be expected from everyone.

Perhaps Manchester United need to bring some players in who have long held the dream, and will act accordingly. One could be Thomas Meunier this summer. 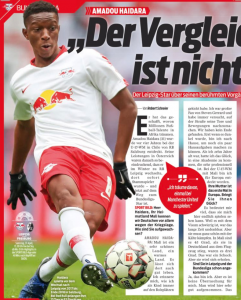 Another, perhaps next summer, depending on his development, could be Amadou Haidara.

The RB Leipzig star has been speaking to SportBild, and when asked his ‘biggest dream’, the 21 year old midfielder said: “I like Manchester United very much and watch as many games as possible. I dream of playing there. But at the moment I am very satisfied with RB Leipzig. Our big goal is to get into the Champions League.”