Soualiho Meite is a name which may appear in the transfer rumour mill more often from now. The Zulte Waregem midfielder, on loan from Lille, is the subject of an article in Wednesday’s Het Belang van Limburg, and they label him a ‘French revelation’.

Zulte Waregem and Lille will split proceeds from a sale, with HBVL saying the clubs are looking for around €12m for a player it’s claimed is ‘coveted by half of Europe’.

Meite himself has big aims, and wants to join a top 8 Premier League club, specifically, he ‘dreams’ of signing for Manchester United.

That’s probably not a good enough reason for Jose Mourinho to sign the player, but if the 22 year old is anywhere near as good as HBVL insist then it may be worth Manchester United having a look at the situation. 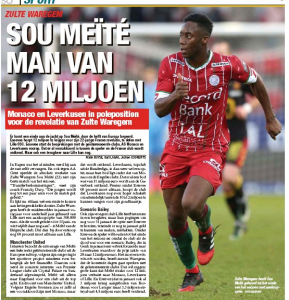 Concrete interest from Crystal Palace and Sunderland has been turned away, because of Meite’s lofty Manchester United, or similar, aims, and when the time comes to move, it’s explained sporting reasons will be as strong as financial ones.

With Crystal Palace and Sunderland battling relegation, the clubs don’t fit with the current plan, and leading the chase right now is said to be AS Monaco and Bayer Leverkusen.

Things are already progressing, but it sounds like Manchester United would certainly be the favourites should they make a move.