Since Alex Sandro signed for Juventus from FC Porto, the Italian media have swung between insisting he’s the best thing since sliced bread, and then wondering if he’s really quite that good and whether an offer should be accepted.

Right now it’s the latter scenario, with a potential transfer continually being talked up for the Brazilian. A whole string of clubs have been named, and Tuttosport again reference Manchester United and PSG.

Both those sides are thought to be in the market for a left back so it’s not a great shock they’re being continually linked to Sandro. Tuttosport say Manchester United are willing to do ‘crazy’ things to sign the player.

It’s not stated what level an offer would be considered ‘crazy’ at, but we’re guessing anything over €60m could be put into such a bracket. 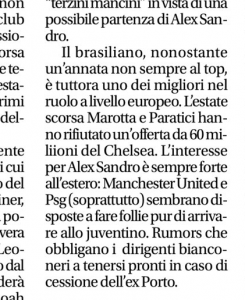 At the weekend Tuttosport made it clear a transfer is seen as likely, saying the player’s future at Juventus is only 10% confirmed.

That’s a pretty small figure given they actually own him and he’s got a contract until 2020, but shows how the feeling is right now. Now the same newspaper says there’s plans already being considered if case the player leaves.

Should Manchester United really want Sandro, then they’ve got a pretty good chance of getting him.