Inter Milan’s transfer plans for the summer are once again analysed by Turin newspaper Tuttosport this Friday.

Two of these rumours are well known by English football fans, as they involve Matteo Darmian from Manchester United and Cedric Soares from Southampton.

Now one could be related to the other, since the Italian fullback could be replacing the Portuguese international at the Nerazzurri for next season.

Tuttosport writes that Inter Milan are still not planning on signing Cedric permanently at the end of his loan spell, which expires in the summer. 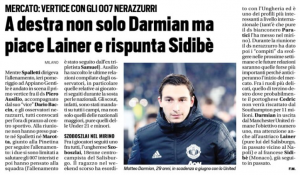 To replace Cedric, the ‘number one target’ is Matteo Darmian, who’s running out of contract with Manchester United at the end of the season.

Since joining Inter in January, Cedric Soares made eight appearances for the club. That’s not a lot, but he’s played more than Darmian, who’s had only six appearances for Manchester United since the start of the season.

So for Inter to take such decision, that means they’re really not happy with the Southampton loanee.