Manchester United have emerged as a new contender to sign Luka Jović on a loan deal.

That’s what AS are reporting today, and they claim Real Madrid are looking to send the striker out on loan before the window closes on Monday.

Zinedine Zidane has also approved for the 22-year-old to go out on a temporary move, and he has ‘three firm offers’ from AS Roma, Inter Milan and AC Milan.

The Serie A trio are now joined by the Red Devils, but the Old Trafford club’s interest in the Serbia international is ‘less intense’. The report also explains joining Ole Gunnar Solskjaer’s side is the ‘most remote option’ for Jović.

Both Real Madrid and the player are looking for a club where he is guaranteed regular minutes. As per the report, Roma are currently leading the chase for the former Eintracht Frankfurt star. 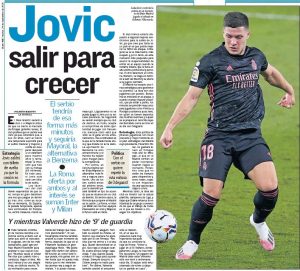 Tuesday’s newspaper edition of AS had a report explaining about Roma, Inter and Milan’s interest in Jović. There wasn’t anything about United, but the Premier League club are mentioned in the report published online.

Either United have joined the race for Jović in the last few hours or Real Madrid are using the English club to put pressure on other suitors to step up their efforts in taking their striker on a loan deal.

AS push this again in a later article, also claiming Manchester United are in contact with Edinson Cavani’s entourage.