The closer we edge to the end of the transfer window, the more chance N’Golo Kanté has of staying at Chelsea.

The Frenchman, who continues to play under Frank Lampard, has been a long-term target for Inter, as Antonio Conte ‘continues to hope for a reunion’ with his former pupil.

This comes from Corriere dello Sport, who give us the latest on the Serie A side’s pursuit of the World Cup winner, making it clear things aren’t easy.

Money is needed, as has been reported multiple times in the past, but ‘the sale of [Milan] Škriniar, combined with that of [Matías] Vecino or perhaps with that of one between [Marcelo] Brozović or [Christian] Eriksen, would give the green light for the assault on Kanté’. 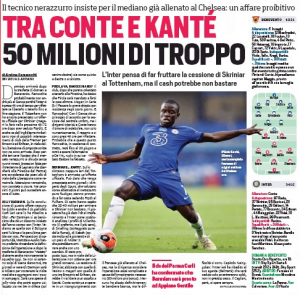 However, those in charge at Inter ‘consider the operation very complicated due to the necessary investment (€50m + bonuses)’.

It’s tough, but ‘no one has definitively raised the white flag’ just yet, meaning the door remains open for a late assault should everything fall into place between now and October 5th.