Manchester United have ‘asked’ about Barcelona’s Antoine Griezmann, but the Spanish club are unwilling to sanction a deal at this point.

That’s according to Mundo Deportivo, who cover the Frenchman’s sorry situation at the Camp Nou.

Griezmann, of course, moved to Barcelona in a highly publicised and controversial move from Atlético Madrid last summer but has endured a torrid first year at the club.

A tally of 14 goals and four assists in 43 games in all competitions is not to be sniffed at, but his spell at the club has so far been littered with talk of him not fitting in and not being able to work with Lionel Messi.

The situation has reached a boiling point under coach Quique Setién, who recently admitted playing the Frenchman is ‘destabilising’ to his team.

That came after he elected to leave Griezmann on the bench for Barça’s clash with Atlético Madrid, bringing him on as a 90th-minute substitute in a move that was widely deemed as humiliating for the player.

Rumours suggested Barcelona may look to cash in and try to get their money back while they can and, according to Mundo, there has been interest.

Manchester United are ‘known’ to like the forward a lot and have ‘asked’ about his situation but were met with a firm rebuttal from Barcelona. 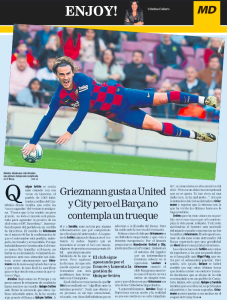 According to the newspaper, they have no intention of selling to Manchester United or any other suitor.

They insist that Griezmann ‘will not enter into any trade’ this summer as they are ‘clear’ that he is an ‘important’ player that they need to help get back to his best.

Thus, United’s interest was turned away, and instead, Setién will likely be moved on for a new coach, presumably one that values Griezmann and can work out how to get the best from him moving forward.