Marseille youngster Niels Nkounkou is set to join Everton having been convinced by the prospect of working under Carlo Ancelotti.

That’s according to Foot Mercato, who back up claims from England that the youngster is set to move to Goodison Park.

They explain that highly-rated Nkounkou had been sought after by several European sides this summer after electing to leave Marseille this summer.

The French club were determined to keep him long-term and offered a contract reflecting that but, unconvinced that he would get playing time under André Villas-Boas in future, Nkounkou elected to look elsewhere.

He was ‘not short of courtiers’ with Everton, Juventus and RB Leipzig all positioning themselves to try and secure his signature.

Indeed, Leipzig ‘tried everything’ to get him ahead of the competition, with them dreaming of ‘expanding their French-speaking colony’ of Dayot Upamecano, Christopher Nkunku and Jean-Kévin Augustin.

But, after ‘intense negotiations’ Nkounkou elected to choose Everton as his next destination, signing a three year deal, which also includes the option of a fourth year.

According to FM, the chance to work and develop under Ancelotti was a huge deciding factor for the youngster.

As was the chance to develop and progress alongside Everton’s current left-backs Lucas Digne and Leighton Baines.

Everton believe the player ‘embodies the future’ and they are convinced he can eventually ‘settle in the left corridor’ of their defence, in other words, they believe he can be their long-term left-back once Digne either leaves or needs replacing.

Supervised by the Frenchman and Baines, their feeling is he will ‘evolve in a context’ that means he will be playing Premier League football sooner rather than later.

The deal is presented as a significant coup for the Toffees, who have not only beaten big competition to his signature but also taken ‘one of the figureheads’ of Marseille’s ‘training centre’ to boot. 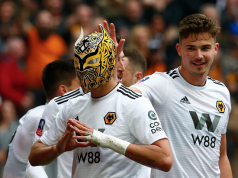