On May 13th, claims of Manchester United interest in Mauro Arambarri first surfaced in Uruguay.

A day later, AS explained the Red Devils had contacted the Getafe player’s agent to relay their interest first hand.

Marca on Tuesday has a report on the midfielder titled: ‘United and Napoli go for Arambarri.’

Within the report, it’s stated the Naples club have joined Ole Gunnar Solskjaer’s side in chasing the player, and Napoli have ‘asked about’ him.

It’s not been made clear if the Serie A side have ‘asked about’ the Uruguay international with Getafe or his representatives.

Arambarri has a €25m release clause in his contract, but the Spanish club are ready to sanction his sale for a discounted price. The newspaper states a fee around €18-20m would be sufficient to take him away from Getafe. 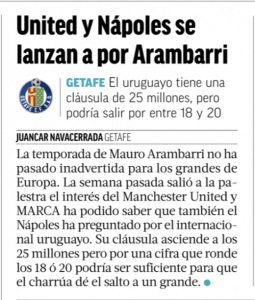 Last weekend, a source close to the Uruguayan told Sport Witness there has been no contact from Manchester United.

That doesn’t rule out contact with Getafe, but certainly contradicts the earlier claims.