It all seemed fine during Claudio Bravo’s return to the Chilean national team. Despite all the expectation of how the squad would react to his comeback, it looked natural when he played La Roja’s two friendlies in the past week.

The Manchester City player even claimed to still be a leader among the squad. Speaking to the local press, he said he still has the respect from teammates.

“I’m still a leader within the team, I’m still the one who talks more than everyone in the dressing room or who shouts more or bothers more a teammate on the pitch. Not because I don’t wear an armband I’m going to keep quiet or stop doing the things I always do.”

But it turns out the dressing room didn’t really like his attitude, according to reports today. El Mercurio’s sports section today brings a front page stating ‘Bravo back complicating Rueda’, and the manager will once again have some problems with his personality. 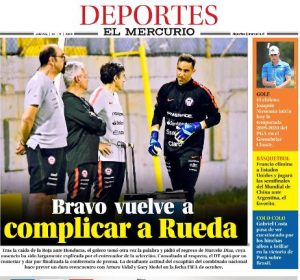 “It’s back to the true Bravo, the most arrogant Bravo, the one who thinks he is above all his teammates,” a source told El Mercurio.

Reinaldo Rueda’s biggest problem should be in the next international break, when Arturo Vidal and Gary Medel, Bravo’s biggest rivals, will be back to the team.

Bravo fell out with Vidal and others shortly before refusing to play for Chile because he wasn’t allowed to choose the goalkeeping coach.