Home Premier League Manchester United What even is a Director of Football, and what options do Manchester...
SHARE

Just get a Director of Football and it’ll all be fine. The clouds will pass, the curse will be lifted, and he can Make Manchester United Great Again.

Ed Woodward will be shunted off to find a frozen peas sponsor, and the yin and yang of football and money shall finally be balanced at Old Trafford.

Most people’s idea of a successful Director of Football, initially, would be one who agrees with much of what they want with regards to transfers both in and out of the club, and who has the ability to attract those signings already whirling around the daydreams.

For many, they have to have to be an established name, have a track-record, gravitas, look good in a suit. A modern football man, able to both scream at Mino Raiola in any number of languages and put an arm round a young La Masia product to convince him to abandon Catalonia for Carrington.

But what even is a Director of Football, and how do successful clubs do it? Often it can feel like the role and Technical Director are interchangeable, and it can very much depend on how a particular club sees it, with even that being fluid.

Andoni Zubizarreta has done the job at Athletic Club Bilbao, Barcelona and is currently at Marseille. Earlier this year he spoke to WyScout about the life of someone in the role, and the main qualities required.

He, like many others, calls the role Sports Director and told a story about Carles Puyol, having retired from playing the game, coming to work with him at Barcelona.

“When I was the Sports Director for Barca, Puyol ended his career and then we worked together. Him as my assistant for five months or less, because he wanted to understand everything that was involved in the organisation.

“After the first month, he began in September, in the month of October, he came to my office and said: ‘Andoni, this work of yours is not what I thought it was, you don’t watch football.’

“Indeed, in the end you deal with agents,” Zubi explained. “With the needs of players, with what the coach needs, with establishing a relationship, between the club and the club’s management structure, with respect to the sporting side. You have to establish a relationship with marketing, and – at the lower level – with training, the parents, future projects.

“You accompany the team, you act as a spokesperson after matches, in interviews, you do many things, which are actually out of view, and definitely what you do least is watch football, which at the end of the day is what those involved in football like to do.

“You do watch football live, you see training, but when you go to a training session you go in part to see the training, but you always have the goal of talking to the coach, speaking with players. There is always a situation which has arisen, that you want to comment on with someone. There are few days when you can sit quietly at the pitch and watch training.

“When you go with your team and you watch matches, you don’t go to watch football, you go to work, because they work on the pitch and you have to watch it from the sidelines too, to analyse it and make decisions. That is the job of a Sports Director.”

Different football cultures will require differing approaches, and whilst in some European countries it’s perfectly common, and indeed expected, for such people to speak to the media at least weekly, in England that’s certainly not the case.

Woodward would likely squirm at the thought of a Director of Football becoming friendly with the media and providing an ongoing narrative on Manchester United.

It’s been reported he’s keener on someone more towards the Technical Director end of the range of interpretations. At the close of the transfer window, the BBC’s Simon Stone said ‘it is thought the role would not involve negotiating with or signing transfer targets’.

That could make it sound more ceremonial, not a man who can, but rather a man to carry the can, and provide a buffer to make United’s executive vice-chairman feel more comfortable when the shit throwing starts.

Such a role sounds like it would be different from a leading scout, and Manchester United lost a highly respected one of those last year when Javier Ribalta, formerly of Juventus, joined Zenit as Sporting Director, given more responsibility at the Russian club.

Should Woodward’s stance be as claimed, then he may as well get Patrice Evra to give up his fledgling coaching career, take a position without any real power, and concentrate on spinning bad situations into reasons to shout I LOVE THIS GAME.

That’s certainly not what fans want.

Edwin van der Sar is a name pushed forward by a vocal section, but he isn’t a Director of Football. Quizzed about the rumours of taking such a job at Manchester United, and whether it’s going to happen, the Dutchman said: “No, I’m enjoying my time at Ajax. I’ve got a different role, I’m the chief executive. I’m really looking forward to bringing Ajax back to the European top level, that we probably touched upon last year, and to make sure that we get the best opportunity to stay there.”

Ajax actually list Van der Sar as their Managing Director, which adds further weight to the feeling many roles at football clubs have interchangeable names. He studied an International Master in Sport Management degree at the Johan Cruyff Institute of Sport Studies.

The former goalkeeper was appointed Marketing Director at Ajax in 2012, and had a role in technical direction from 2015 to 2017. It’s unlikely he’d want a lesser job than he has, unless given wide ranging powers, and it’s perhaps even less likely Woodward would want someone accomplished in the business side to come in and tread on his toes.

Marc Overmars is the Director of Football, yet it doesn’t take a great leap of faith to believe he’s had help along the way from Van der Sar. After finishing his career at Go Ahead Eagles in 2009, the former Arsenal player took shares in the Eerste Divisie club and worked in some kind of football direction role for them voluntarily… it didn’t go particularly well.

In 2012 he became Ajax’s Director of Football, after doing some part-time coaching with the Amsterdam side.

The lack of top level experience wouldn’t be attractive to many of those calling for a big name at Manchester United, yet it’s worked for Ajax, even if at least part of the reason for that has been fortune of timing.

Ajax have long had a plan to fill their management levels with former players, and earlier this year, when the club were the darlings of Europe, Marca printed a organisation tree to show the various branches of influence. 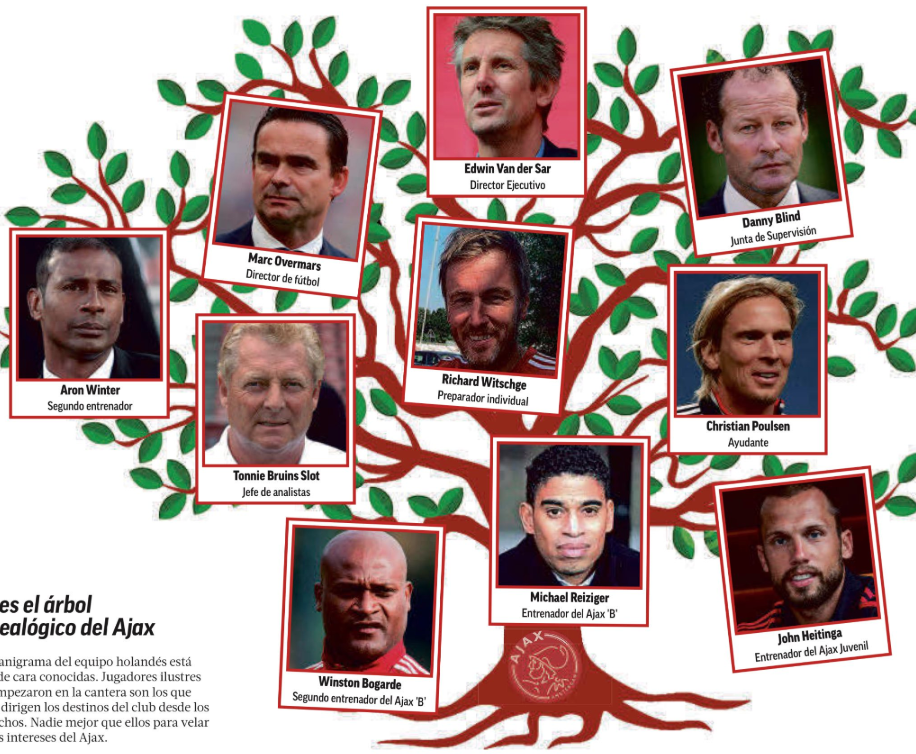 Another club pointed at in a ‘Do It Like Them’ way is Juventus, kings of the free transfer and masters of other impressive signings.

Pavel Nedved is a Vice-President, under President Andrea Agnelli.

Their take on the role is Chief Football Officer, and his name is Fabio Paratici. During transfer windows he’s omnipresent, meeting agents at hotels across Italy, and arranging transfers at all levels of the club.

After a career as a professional footballer, Paratici worked as head scout at Sampdoria before taking on the Sports Director role there. He then moved to Juventus in 2010. At the same time, Giuseppe Marotta joined as Director General.

Marotta left Juve in 2018 and quickly became Chief Executive Officer of Sport at Inter Milan. Inter’s take on the Director of Football role is Piero Ausilio.

Ausilio joined Inter in 1998, working with the youth sides, and clawed his way up to become Sports Director in 2010.

Italian clubs often have two officials working closely together on transfers, a President, Vice-President, or Marotta type figure along with the more traditional Director of Football.

Over in Spain, one of the names previously linked with Manchester United is Andrea Berta. The Italian had roles at Parma and Genoa before moving to Atletico Madrid in a technical capacity in 2013, eventually becoming Sport Director in 2017.

He works very closely with Diego Simeone and, given there’s been interest from other big clubs, has managed to build up some power at the club.

Monchi at Sevilla is both an example of how a Sporting Director (The Spaniard’s current title) can become famous through good work, and of how that doesn’t always travel to other clubs, with his spell at AS Roma not being one he’ll want to highlight too much.

His first stint at Sevilla started in 2010, just after he’d retired from his career as a goalkeeper with the club and they’d been relegated to the second division.

Borussia Dortmund‘s pair of Hans-Joachim Watzke and Michael Zorc often come in for much praise. Watzke is the big cheese, in charge of the whole BVB show, so he doesn’t come into the thinking.

Zorc was a one-club-man with the Bundesliga side, and when he finished his playing career he moved straight into what’s often known in Germany as the Sports Manager role.

Hasan Salihamidžić didn’t have any great experience in the role before he was appointed Sporting Director by Bayern Munich in 2017.

At the time, the club’s President Uli Hoeneß explained: “We’ve said for some time that FC Bayern have to find a new way forward. We’ve got to go back to our roots, make the most of the academy, and create a good atmosphere between the fans and everybody involved in this club. And who is better placed than Hasan Salihamidžić? He knows FC Bayern inside out and has experienced all the highs and lows. We need a man who has the confidence of the players, the board and the fans. We’re convinced we’ve found the man we’ve been looking for for a long time.”

Over in France, another man repeatedly linked with a role at Manchester United is Luis Campos. He’s one of the very few people to have enjoyed success at more than one club, firstly with AS Monaco and then Lille.

Campos had previously advised Jose Mourinho at Real Madrid and has a relationship with Jorge Mendes. He’s not actually Lille’s official Director of Football, but rather works as an advisor to owner Gerard Lopez.

Maybe that kind of arm’s length approach could be tempting for Woodward.

If it’s not a glorified (in the best possible sense) scout such as Paul Mitchell who United are looking for, and it could be argued they had or have that box ticked already, then it will either be a ceremonial role or someone with genuine clout.

The idea of recruiting a former player with little or no experience has been been roundly scoffed at when floated, however, it’s a path well trodden by big clubs around Europe. Snatching someone from elsewhere doesn’t bring a guarantee of success, especially when the club’s current structure would likely be alien, and somewhat alarming, to several of those mentioned.

Just like Manchester United have found out painfully with transfers in recent years, it’s not always the biggest names who have the greatest impact. An appointment from within, or from just outside, could be the wisest, if not most popular, next step.