Ahead of the final of Copa Libertadores between River Plate and Boca Juniors, which will be played in Madrid on Sunday, Spanish newspaper El País brings five pages about these clubs today.

One of the stories is about Exequiel Palacios, a 20-year-old midfielder who would have attracted attention from Real Madrid.

The article is pretty long, telling all of Palacio’s story at River Plate, since his time at the club’s academy and how manager Marcelo Gallardo ‘fell in love with him’.

El País is a quality newspaper, so it brings several quotes, which go from River’s staff to European scouts. And that includes an official from Manchester City.

The newspaper writes that the Premier League champions are also interested in Palacios, and brings some words from one of the club’s emissaries.

“It’s hard to pay 20 million for such a young player. We have good footballers in their position that would stall their growth,” a Manchester City scout told El País. Real Madrid, on the other hand, would be keen on spending that much on the youngster. 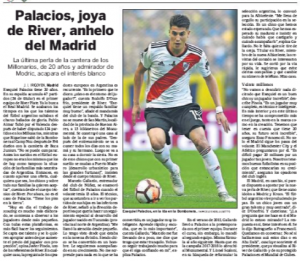 Besides coming from a reliable newspaper, the rumour makes a lot of sense.

Manchester City certainly have a huge scouting network which keeps an eye on the biggest talents in the world, but would have problems using them in the current squad.

And Real Madrid, who have spent €80m to sign two 17-year-olds from Brazil this year, don’t seem afraid of paying big for South American starlets.

Watford duo eyed up for moves – Club demanding €15m for one, considered a ‘very interesting operation’

Watford duo eyed up for moves – Club demanding €15m for...

West Ham to face frustration in hunt for fullback – Club...