Early on Friday morning, a report emerged in the Netherlands claiming that Paris Saint-Germain had managed to convince Frenkie de Jong to sign for them over Manchester City.

While that, on paper, would sort out the hole left by an Adrien Rabiot departure, signing the young Dutchman doesn’t solve their need for an out and out defensive midfielder à la Kanté.

That’s why the position remains their priority going forward, and Leandro Paredes seems to be one of their main targets, all the while ‘still working on signing Watford’s Abdoulaye Doucouré’.

This is according to the rather reliable Paris United, whose claims are backed up and expanded on a bit by La Gazette des Transferts.

The issue with any Paris Saint-Germain transfer in the coming months is money, which they aren’t really allowed to spend for FFP reasons after splashing out on €400m+ worth of players over the past two summers. 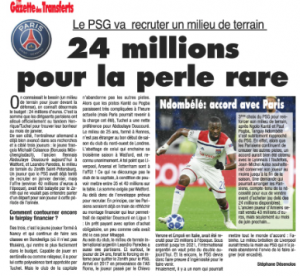 An amount of €24m or so is said to have been put aside by the French club for the defensive midfield position, which wouldn’t be enough to convince Watford to let their star go.

To counter this issue, La Gazette state Paris Saint-Germain are thinking of offering an ‘Mbappé style deal’ to the Hornets, meaning a loan offer with a compulsory option to buy at the end of the season.

Unfortunately, seeing how important Doucouré has been for Javi Gracia’s side this season, we can’t see them agreeing to this, regardless of how much money the French club offers because, in the short term, the Premier League club gets nothing out of it.