Corriere dello Sport aren’t messing around on Thursday, going all out by stating Carlo Ancelotti is primed to take over from Arsène Wenger at Arsenal.

This comes after claims the Gunners will let the French manager go come the end of the season, despite his contract at the Emirates running out in June 2019.

Having chosen Ancelotti as his successor, Arsenal, according to the Italian newspaper, are prepared to offer the 59-year-old €40m over four years, averaging his wages, bonuses excluded, at €10m/year. 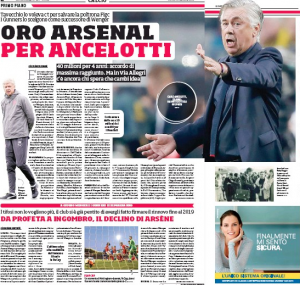 Apparently, this Arsenal offer was made to the former Chelsea manager back in late November/early December, around the same time he was being touted as the next Italy manager, an offer he ultimately refused.

When this was all happening, there was a lot of talk of Ancelotti wanting to manage a club in London, a city he fell in love with during his time at Stamford Bridge, and that’s why Arsenal seemed perfect for him.

While that might be the case, it remains to be seen what the Gunners fanbase have to say about this, with many undoubtedly preferring a younger manager coming in, like Thomas Tuchel and co.