Recently sacked by Bayern Munich, Carlo Ancelotti is now a free agent and is attracting a lot of interest.

While things didn’t work out in Germany, the Italian manager has generally been well liked wherever he’s gone, which has led to a good reputation, and that’s why so many teams are considering him for the future.

Over the weekend, Corriere dello Sport stated both Croatia and Chelsea were thinking about appointing the former AC Milan head coach in the future, and another team has popped up, this time Arsenal. 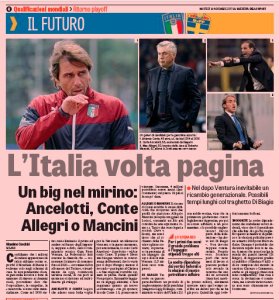 Arsène Wenger has remained in charge of the Gunners probably longer than he should have, and with the club once again performing below expectations, Gazzetta dello Sport believe Arsenal want him to take over from the French manager.

This comes amid an article where Italy are now considering Carlo Ancelotti to be their next manager, having failed to qualify for the World Cup for the first time in 60 years.

Gazzetta state they’ll have to beat Arsenal to it, and with the Gunners unlikely to make a managerial change midway through the season, they might just do that.

That is, of course, unless Ancelotti is more interested in club management for the time being.