In one of the most surprising rumours from the transfer window, Wolverhampton Wanderers are now linked to Porto striker Vincent Aboubakar.

French outlet Foot Mercato claims Wolves have joined Marseille in the race for the player, and made contact with the Portuguese club today.

The same website has been saying that Marseille have recently offered €17m, something which would be very close to the €20m that Porto have been demanding for the player.

Wolves manager Nuno Espírito Santo may have spent the last season at Porto, but he didn’t manage Aboubakar there. The player spent an year on loan at Besiktas after a controversial exit from the Portuguese side. 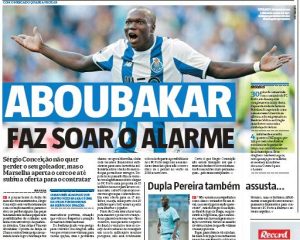 Aboubakar was expected to leave for good this summer window, but then made up with the club, and had a good start to the season, scoring four goals in four games.

That clearly means he’s very valuable to the team right now, so a different situation from Ruben Neves. In his last home match, Aboubakar was easily the best performer, and scored a hat-trick, so Porto would need a really good argument to sell him.

Record had a piece today explaining Porto manager Sérgio Conceição now has ‘his heart in his mouth’, as he’s much afraid of losing the striker in the last days of the transfer window. Wolves weren’t mentioned at that stage, but adding another club isn’t going to make Conceição feel any better.

It’s even strange to hear Porto would let Aboubakar go for only €20m, especially because the club only owns 37.5% of his rights. And with a €50m release clause, they could ask much more.

It sounds like a golden opportunity for Wolves, even though it’s hard to see it happening.