Paul Pogba has publicly expressed his desire to find a new challenge in the summer transfer window.

Thursday’s edition of AS reports Manchester United are looking at replacement for the World Cup winner, making sure they’re prepared.

It’s claimed Atletico Madrid’s Saul Niguez is the chosen one by the Red Devils and emissaries from Old Trafford club have already contacted the player’s entourage to communicate their intention.

Ole Gunnar Solskjaer’s side have informed the 24-year-old’s camp about their interest, but it will not be easy for them to take away from the Spanish club.

Diego Simeone’s side view him as a pillar of their new project following the departures of Godin, Juanfran, Filipe Luís, Lucas Hernandez and Rodri, and impending exit of Antoine Griezmann. 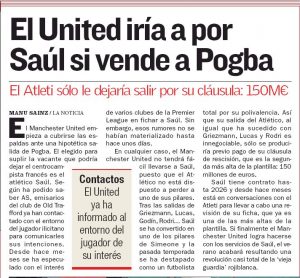 Saul’s contract at Atletico runs down in 2026 and he’s been in talks with the club for months to review his salary.

That could explain the Manchester United links. Put some fear into Atletico over the clause, and get a shiny new pay package.