A Bola have yet another Bruno Fernandes story on Wednesday, and whilst the headline is mainly about Tottenham, the article is far more weighted towards Manchester United.

Potential interest from Spurs is covered, as they would be looking to replace Christian Eriksen. However, these reports seem part of wider speculation, and there’s no claim of Tottenham actually doing anything.

Then Liverpool interest is very briefly touched upon, although the Reds haven’t done anything about that, and there’s been no efforts to build a deal with Sporting.

When it comes to Manchester United, A Bola explains the club have made clear their intention to sign the goalscoring midfielder. They’ve requested a meeting with Sporting to try and reach an agreement, and that could be held this week.

Should a deal be found then the announcement would be after the UEFA Nations League, which ends on Sunday. 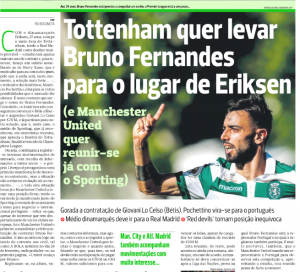 Manchester United are willing to pay €70-80m, which is thought to be enough for Sporting. The Red Devils want to secure the signing ‘as soon as possible’ in order to beat competition from elsewhere.

Manchester City haven’t given up, according to the claims, but it’s thought Atletico Madrid are at a disadvantage as Bruno Fernandes has ‘dreamed of being able to play in the Premier League’.