When you take a first glance at the big article regarding Sergej Milinkovic-Savic and Manchester United in Monday’s Il Tempo, it would be easy to think something is happening.

After all, the headline reads “Sergej, the exit is inevitable”, with a subheading stating he ‘will leave Lazio’ and ‘it’s just a matter of time’.

They then explain Claudio Lotito, the club’s owner, is ‘evaluating’ which of Manchester United’s or Paris Saint-Germain’s offers is better.

Except, well, he really isn’t.

While there’s no denying that, most likely at some point, the Lazio star will leave (because he can’t stay there forever), the rest of it is extremely misleading as no offers have been made yet, which the article makes very clear. 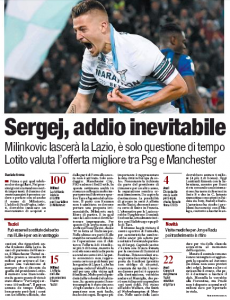 All that’s happened so far are enquiries from the Red Devils, Manchester City and Paris Saint-Germain.

There is talk of Manchester United ready to make an €80m offer, but it’s once again stated it won’t be presented until after Paul Pogba is sold.

The instructions given to Mateja Kezman, Milinkovic-Savic’s agent, are clear: present an offer Lazio can’t refuse, and the Serbian is free.

Unfortunately, he hasn’t been able to come up with that just yet.