Borussia Dortmund had given Manchester United a deadline of August 10th to agree a €120m deal for Jadon Sancho.

The Red Devils haven’t met the Bundesliga side’s asking price and their sporting director, Michael Zorc, this week insisted the winger will continue at Signal Iduna Park next season.

According to Sport, the Premier League side will ‘insist’ on signing Sancho, but have also identified Barcelona’s Ansu Fati as a Sancho alternative.

Two months ago, the same newspaper explained the Red Devils are serious about Fati, and Wednesday’s edition of Sport explains Ole Gunnar Solskjaer’s side ‘return for Fati’ as they have ‘asked again’ for the 17-year-old.

Jorge Mendes shares a good relationship with the teenager’s family and also with the Old Trafford club. The super-agent proposed the winger to the English club and has been trying to build a deal.

Mendes asked Barca for Fati’s valuation at the start of this summer and ‘slipped a verbal offer of €100m’. This could have come from United and it’s suggested the English side ‘would be in a position’ to submit that offer.

According to Sport, Manchester United ‘have more than €100m’ ready for a Sancho alternative.

Barca, for their part, have remained firm and maintained the player is ‘non-transferable’. They will ‘unilaterally renew’ the player’s contract to increase his release clause from €170m. 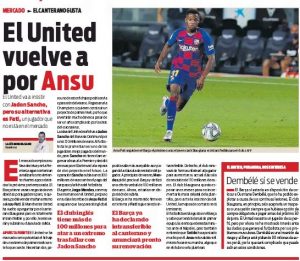 The Blaugrana’s idea was to wait for some more months before offering an extension. However, Fati’s renewal could be ‘imminent’ because of United’s interest.

Manchester United’s problems with signing Sancho gives an opportunity for clubs, agents, and the media close to them to make claims about other players.

There’s a possibility this could be Barcelona trying to look strong, or Fati’s camp attempting to rush a renewal and pay rise. Yesterday saw a claim from Spain that United have made an approach for Real Madrid’s Vinicius, and their chances of that signing were also dismissed.

The coming days are likely to see more claims, whether true or not.