Another day, another article in the Italian press about Manchester United’s Chris Smalling, but rather than focusing on what the situation between his two clubs, they look at the player’s mindset regarding a stay at AS Roma.

The defender is on loan with the Italians until the end of the season, and while there has been a lot of talk regarding the move potentially being made permanent, there are also many obstacles to overcome.

The biggest for Roma remains their current position in the league, as they would miss out on Champions League football and thus the extra money they need to pay Manchester United for the 30-year-old.

If they do end up outside the top four, then things would be tricky for both club and player.

Corriere dello Sport’s Rome edition explain Smalling ‘still has some doubts’ about both Roma’s future and the possibility of once again missing out on top European football.

Despite Gianluca Petrachi making contacts with the player’s agent regarding a potential extension of his stay in Italy’s capital, the problem remains convincing Manchester United. 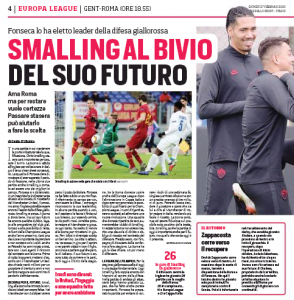 Smalling is said to have ‘found the ideal conditions to be happy in Rome’, as the city ‘fascinates him’ and he’s started speaking a few words of Italian.

However, should Roma miss out on the Champions League and the new owners decide to start all over, then this could ‘increase Smalling’s doubts’.

For now, Petrachi is leaving it up to the player, and the hope is he will contact Manchester United himself and let them know he wants to stay in Rome for the foreseeable future.

In the meantime, Roma will remain open to getting a deal done and hope the future talks will be positive.