Chelsea are keen on Lyon midfielder Houssem Aouar and have prepared a €50m bid for the Frenchman.

That’s according to Tuttomercatoweb, who say Chelsea have the player ‘in their sights’ and ‘raise the pressure’ on Juventus, who also interested in a move.

The Blues are free to sign players this summer, and it is widely expected they will be busy bolstering Frank Lampard’s squad as a result.

A midfielder could be at the top of their list, with Jorginho’s future in doubt after his agent admitted they would be open to reuniting with Maurizio Sarri at Juventus.

Should that happen, Chelsea would need to source a replacement and Aouar would be an ideal choice.

TMW certainly say they are interested, saying they are ‘serious’ about the 21-year-old and a €50m bid is ‘ready’ to be submitted to Lyon.

They are not likely to be keen on losing their star man, but according to L’Equipe, they know ‘it will be difficult’ to keep hold of him this summer. 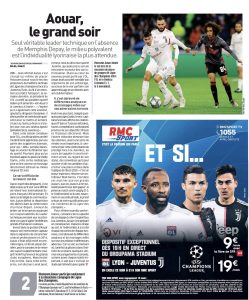 Jean-Michel Aulas and Juninho managed to convince Aouar to stay last summer when there was interest from ‘major European clubs’, notably Manchester City but another impressive campaign from him has lowered their chances of doing the same this year.

Indeed, the interest is only likely to have increased after his star turn in the shock 1-0 win over Juventus in the Champions League, and Chelsea may have to move quickly, as they did with the capture of Hakim Ziyech, if they are to get their man.