On November 25th, aged 16 years and 182 days, Jérémy Doku became the eighth youngest ever Anderlecht player to make his debut for the Belgian club.

However, if Liverpool or Manchester United had managed to get what they wanted, that stat would never have existed, and it’s fair to say those in charge in Belgium are chuffed to bits to have managed to keep him.

The Reds were the biggest threat because of his agency, Stellar Group, having reached a near full agreement with Jürgen Klopp’s side, at least verbally, 18 months ago, and the rest we’ve already covered here, as there was hope the youngster could be included as part of the Lazar Markovic loan from last January.

Manchester United, however, decided to go another route, using one of their great Anderlecht connections to try and lend a helping hand: Romelu Lukaku. 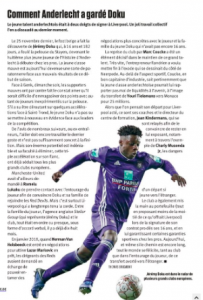 According to Sport/Foot, the Red Devils asked their striker to get in touch with the player’s entourage in order to convince Doku and his family to swap Belgium for Old Trafford, much like Adnan Januzaj did all those years ago.

However, that clearly didn’t work out, since Liverpool overtook them, to no avail, before Anderlecht opened their wallet and gave the youngster a better deal (which was half of what the Anfield based club had put forward).

How did they convince him to stay? They used Chelsea’s Charly Musonda Jr. as an example of what could happen to him if he left the cub too quickly.