Home Europe Man City player ‘would be on the way’ to another club –...
SHARE

The forward hasn’t featured for the Citizens and is unlikely to be included in Pep Guardiola’s plans for next season, if Het Belang van Limburg are to be believed.

It’s claimed the Colombian international ‘would be on the way’ to Lommel SK.

The City Football Group, who own the Premier League side, completed the purchase of the second division Belgian club in May. The relationship between the Etihad club and Lommel has helped the latter in signing the 23-year-old.

According to HBVL, Lommel ‘have an agreement’ with the South American. After having loan spells at Deportivo La Coruña, Girona, Flamengo, Mexican side Santos Laguna and Portimonense, the player is set to continue his adventure in Belgium.

Eladio Tamayo managed Moreno when he was still in Colombia. After moving to Europe, he changed agents and is now represented by a Spanish agent.

Tamayo spoke to Antena 2 and believes his former client is not well advised by his current representatives.

“For me it is a bit nostalgic when they ask me about Marlos because he lived with me in my house, I taught him many things in life,” Tamayo said.

“After Nacional sold Marlos to Manchester City, he made the decision in Europe that he was leaving me because he was going to continue with a Spanish representative. So, since he was coming of age, I told him that he would see what suits him or what favours him.

“He has talent, he is a great human being. Sometimes one makes mistakes with people who promise things differently and well, those are the decisions. My relationship with Marlos Moreno ended three years ago, not a greeting, not a call, nothing.

“Several [players] have left quickly to Europe; they have left young and have managed to succeed.

“I return to the same thing, sometimes there are athletes who begin to approach some people who promise them heaven and earth just for the economic interest, I believe that there are people who advised him badly.” 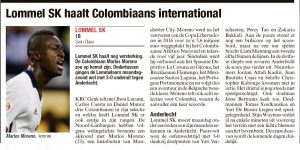 “Marlos’ friends in the national team were James and Cuadrado, and Cuadrado seems to me a great example as a human being. I don’t know what happened, but I think Marlos is badly advised.”