We know Claudio Bravo’s issues with the Chilean national team don’t get a lot of attention from Manchester City fans, since it doesn’t really affect the club.

Still, it’s always worth showing how big this is for the goalkeeper’s home country press, who once again today, have the subject on the front page of a sports section.

That’s because a week before the official call up, the national team manager has made it clear he’s not sacrificing the team’s good chemistry just to have Bravo back in the squad. 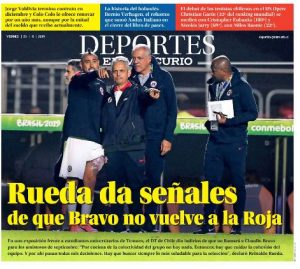 “Above the group collectivity there is nothing. We must take care of the cohesion of the team and that’s where all the decisions happen. Why don’t I call up Marcelo Díaz, why don’t I call up Claudio Bravo, why isn’t this one or the other, why I brought this one … Everything is thought of in the medium-term projection. Looking for those alternatives, I try to talk individually with them about what I want for the national team.”

As it’s been widely reported, Bravo has issues with a number of teammates who don’t really want him to ever be in the squad again.

Why is it a big deal for the local press? Because regardless of being mostly a reserve player, Bravo has some great experience by playing for Barcelona and Manchester City.

Chile played the last Copa America with goalkeepers from Racing, Colo Colo and Huachipato, so of course a player of his renown should have a place in the squad under normal conditions.